Bowling has been around throughout history but it seems to have an association with the late 1950s.

This is probably due to its great popularity with teenagers during this era. Bowling is a fun and a simple recreational pastime!

Earlier in the year, my family and I went to bowling for the night and we had loads of fun. We bowled for hours! There was retro music playing and a retro diner to go and eat at. Honestly, I had not bowled in years and I am obsessed with bowling again. I love it and so does my family. It is so much fun. We cannot wait to go back.

Bowling is easy to learn it is just bowling the ball down a lane towards ten pins positioned as a triangle. The object of the game is to knock all ten pins down in the first roll (known as a strike) or in the second strike (known as a spare) or as many pins as possible. The more pins that you knock down, earliest, the more points earned. You only get two balls each round. There are ten rounds per game 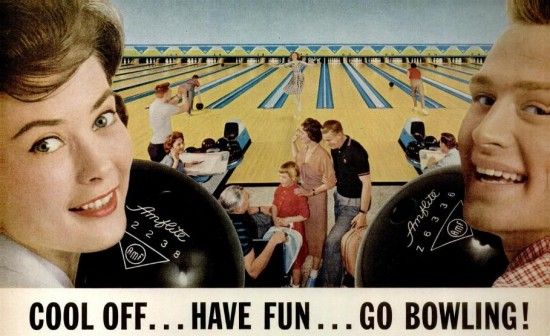 When you are next able to, and thinking of something different to do, give bowling a go…….I am sure that you will fall in love with bowling, just like my family and I did.

You don’t need big bucks to get fit! Women in the 1950’s proved this. Women did not strive to go to the gym to stay fit like we do today, as they walked the kids to school, walked to supermarkets, carried heavy vacuums and other household appliances and many other manual tasks. With our modern technology, women in the 1950’s spent a lot more time on their feet compared to us. All these strenuous duties was one way to get fit!

Research actually suggests that the average 50’s woman would burn 1000 calories a day, where as the modern woman only burns on average, around 556.

In 1953, the first televised program for women’s exercise began. It was nationally televised in 1959, called the Jack LaLanne Show. It mainly consisted of calisthenics.

In the 50’s a work out consisted of calisthenics, hula hooping, yoga, bike riding or dancing.

In the early 50’s, calisthenic exercises were published in books. Women would practice these exercises in their homes, often during the day, when alone. Later, classes began so women could attend them and meet friends. They became more popular due to Jack LaLanne’s TV Show.

Calisthenics became popular in the 50s

2. Hula hooping is a great ab work out, and is really fun. Why not just pick up your kids hula hoop and give it a go, you’ll be surprised at how much fun it is!

3. Yoga is seen as a form of relaxation, toning the body, and increasing metabolism. Once control of the body has been completely mastered, the mind is ready for meditation. It was practiced at home, guided by a book.

Nowadays there a plenty of yoga studios you could try, and plenty of online yoga YouTube videos!

4. Bike riding is great for exercising and is great for socialising! You could purchase a bicycle to ride around your town. Many councils have installed bicycle tracks around local communities. Alternatively, you could purchase an indoors exercise bike, or use one at your local gym. Exercise bikes still achieve great results, and are convenient in the comfort of your own home!

5. Dancing in the 50’s was also great exercise… Be it rock ‘n’roll, swing, jitterbug, boogie-woogie or bop! All dancing is a great exercise and a great form of socialising. There are many schools today, that teach 50s dancing:

Try it out, you will love it! I have enrolled in classes to commence soon. I am so excited! I will tell you how I go.

Dancing in the 50s

Maybe we should take a few of these ideas from the 1950’s women and put them into practice in our modern busy lives. I love bike riding, yoga and I am about to learn some rock’n’roll dancing! More of that in my later blogs…

Can’t wait for the new series. Hope to win a pass to the 60s themed launch party 🎉🤞🏻🌸
My vintage hairdryer collection. Check out my blog, link in my bio! Find out about hairdryers through history 💈💇‍♀️ #vintage #vintagehairdryer #retro #vintagehairdresser
@thegatheredhaus have an excellent giveaway that I would love to win, Vintage sheet set #tghgiveaway2021
1920s swing gal @amberbonanno
Won a book face competition thanks to my creative friend @annajean.5 Love the 1800s look. #1800s #vintage #victorianera
The gorgeous Elizabeth Montgomery #elizabethmontgomery #bewitched #retro #pinup #goddess