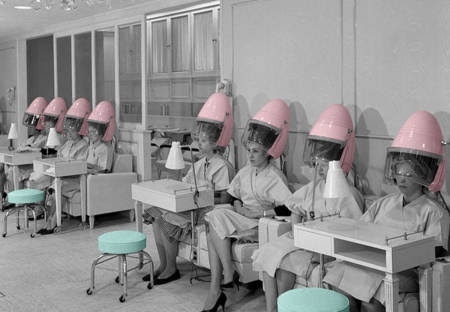 Hairdryers are important… they play an essential role in a good haircut. A hairdryer takes the moisture out of your hair and creates a natural body and shape to your hairstyle. It is essential to own a good hairdryer in order to create less frizz and a good all-over style. A good hairdryer will dispense heat more evenly and not damage your hair.

In 1890, the first hairdryer was invented by French stylist Alexander Godefroy. Now, don’t we owe him praise! His invention was very large, where you sat with a bonnet attached to a chimney pipe of a gas stove. Alexander Godefroy invented it for his own hair salon in France. Hence, it was not portable.

In the 1920s, hairdryers were on the market in hand-held form. They look quite heavy and only have a small nozzle so they would only dispense air to smaller areas of your hair. This would be handy for styling your hair, but meant drying your hair would take a lot longer.

In 1936, there was the multi-prong hairdryer. It was a strange looking hairdryer and appears as though aliens are probing information from our brains (LOL). But you have to admit it is rather peculiar looking?!

During the 1950s and 1960s, the bonnet dryer was introduced. This was where the hairdryer was in a portable box, with a tube connecting to a bonnet. This bonnet is placed on top of a persons head. This worked by giving an even amount of heat to the whole head at once. This was handy in this era – curlers were often used and once your hair was dried you would style it. Later, it became more portable and could be worn attached to your pants.

In the 1950s there were also hairdryers on stands, which made it easier when styling your hair. This hairdryer allows the flexibility of both your hands to be free for styling while blowing. I love the look of this hairdryer.

In the 1960s and 1970s, there was the home portable salonette hairdryer. This was handy for fast drying and it’s compact size. It allowed you to sit, dry & style your hair like in the salons, but in a compact size for your home.

In the 1960s, there were also home salon stand hairdryers. These were a great way to set your hair with rollers, then style your hair. They were not compact like the above options, but if you had the room in your house these were the more expensive alternative that gave better results.

The 1970s hairdryers are not too different to todays hairdryers, just a bit heavier in comparison. They were basic and just came with a nozzle attachment for styling.

In the 1980s, hairdryers came with more accessories than just nozzles… the diffuser! Diffusers became a big hit as they helped your hair to look fuller and enhanced your curls. And as we know, the 1980s hairstyles became much bigger than ever before! The motto with hair was “the bigger, the better” (LOL), hence the trend towards diffusers.

In the 1990s, the trend in hairdryers was the smaller, the better. As with many other electrical items, trends have gone from big and bulky to small … and now back to bigger!

Today, most hairdryers are the same. They are lightweight, portable and easily functional. They can come with a few different attachments for styling, as well. Another difference from earlier models being that we have the option of the cool setting. Many hairdressers, and people, prefer using cooler settings to avoid damaging your hair.

Many people like to collect vintage hairdryers as they are quirky and are a good representation of the retro life. I have collected a few hairdryers over the years and I thought I would share them with you:

What do you think of the varying hairdryers over time? Its interesting that there hasn’t been too much change since the 1970s when compared to earlier models. Do you collect vintage hairdryers? I would love to see your collection.