The bullet bra was actually created in 1939, but unfortunately WW2 put these plans on hold as women were needed to fill more traditionally male jobs and roles. Women joined nurse corps and the armed forces so that more men could be sent into combat. 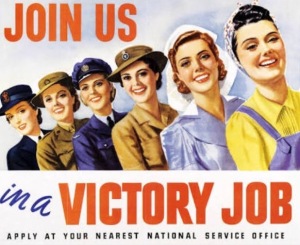 Advertisement for women in WW2

After the lean years of WW2, women were getting their curves back in the prosperity of the post-war boom. The trend promoted an hourglass figure. They characterised round hips with belted jackets and a cinched waist and prominent breasts with bullet bras.

Bullet bras became popular due to actresses like Marilyn Monroe and Lana Turner, who was nicknamed the “Sweater Girl”

The bullet bra put breasts centre stage. Bullet bras allowed women to add a cup size to their busts. The bra emphasised bras with its axis perpendicular to the breasts, and featured spiral stitching that emphasised the cone shaping. It had a cone centre on the nipples.

With the onset of television advertisements, this allowed for promotional opportunity and was a huge part in the bras popularity! Fashion and glamour became a huge part of women’s fashion choices in the 1950s. 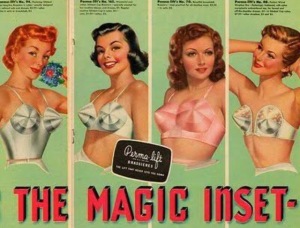 The popularity of the bullet bra declined in the 1960s, due mainly in part to the new feminist philosophy.

It was reintroduced to the fashion world in 1990, by pop singer Madonna who began to wear bullet bras as outerwear as designed by Jean Paul Gaultier.

Other celebrities such as Katy Perry and Amy Winehouse adopted the bullet bra look on occasions in modern days.

What do you think of the bullet bra look? Let me know, I am interested in your opinions.

Blog was inspired by my sister❤️

2 thoughts on “Women getting their points out there!”