Stray Cats were a rockabilly band formed in America in 1979. Rockabilly music blends country with rhythm and blues. The band was formed by guitarist and vocalist Brian Setzer. Other members included double bassist Lee Rocker and drummer Slim Jim Phantom. 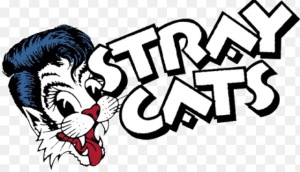 The band was influenced by music such as Gene Vincent, Bill Haley and the Comets and Eddie Cochran. They performed at the famous CBGB club, and gained a huge following. In addition to playing rockabilly music, they wore rockabilly style clothes, such as creepers, western shirts and drape jackets.

In 1981 they released their self-titled debut album, with hits such as Stray Cat Strut, Rock This Town and Runaway Boys. It was a huge success. 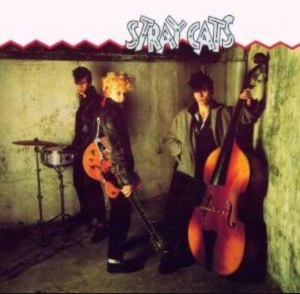 The second album, Gonna Ball, was not as successful as the first album. Following this they released their third album, Built for Speed, which went double platinum. It has hit songs such as Rock This Town, Stray Cat Strut,Rumble in Brighton and Built For Speed. They went on to produce more albums, along with “best of” albums. There was also changes to the original line-up in the band, but Brian remained as the singer.

In 2008/2009, Stray Cats toured Australia! These shows were a part of their Farewell Tour and completely sold out. They played at the Enmore Theatre in Sydney. What a show!!

Advertisement for Stray Cats concert in 2009 at The Enmore Theatre
Image: Setzerarchive.com

In 1990, Brian formed a new band: The Brian Setzer Orchestra. It is a jump blues swing revival band. Jump blues is an up-tempo style of blues. It was popular in the 1940s and it is a combination of rhythm and blues and rock and roll.

Whenever anyone gets into my little VW Beetle, I am usually playing a Stray Cats CD… really loud! I just love their music (which is why I had to write this blog), it makes me feel so happy and gives me the urge to get up and dance. I absolutely love the beat of the double bass in their music. The sounds are great and the lyrics will make you want to sing along, as they are so catchy!

When you can, get a listen to some Stray Cats. I am sure you will love it, as much as me! You will probably feel like dancing too. (Though it’s a bit hard when you are driving) The double bass sound just makes the music, as well as Brian’s voice.

What is your favourite band? Message me, I would love to hear what you are listening to.